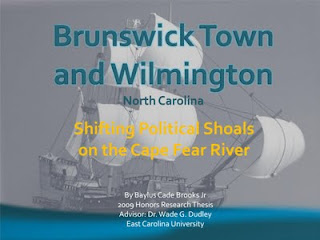 I wanted to let you folks know about my recent research on the development of Wilmington. It contains a good bit about James Wimble and his maritime influence that saved the town in 1733. I plan a further treatise specifically on Wimble as well. I also wanted to let you know that I will be presenting this paper at the SNCURCS conference for undergraduate research on Sat., Nov. 21st at UNC-W along with many other terrific papers. The history presentation where my paper will be given is the Fisher Student Center in Room 1023 (Bald Head Island room) at 3:15 pm. This is a revision of the original story that involves a great deal of political affairs within North Carolina and in England. I think it’s exciting!

The abstract of the paper goes:
Brunswick Town, the Cape Fear region’s first port city, provided a deep-water port that accommodated trans-Atlantic shipping on the only easily accessible river in the colony of North Carolina. Contemporary accounts stated that it was like to be a “flourishing place,” while town lot sales reflected its profitability in 1731. However, Brunswick Town was not destined to remain and its founder, Maurice Moore and his family would suffer great economic trials as a result. Brunswick Town barely lasted until the American Revolution and today, remains only a vague memory. The sale of North Carolina in 1729 and the Duke of Newcastle’s rise to prominence in 1730 initiated Brunswick Town’s downfall. Governor George Burringon, a hot-headed protégé of Newcastle’s, came back to the colony after a questionable previous term, charged with the destruction of Maurice Moore’s increasingly illegal settlement. He voided grants along the eastern bank of that river and granted land to his own associates to found the enormously successful town of Wilmington. However, Wilmington would not have survived political opposition had it not been for another patronage influence of Newcastle’s, James Wimble, arriving in 1733 to inject the ailing new town with much needed political and social influence.


Much detail about where John Watson got his land grant has never been told. Maurice Moore and his Family were huge players in the drama. Fortunately, for Wilmington, so was the Duke of Newcastle. Maurice Moore was in possession of the land that later became Wilmington. By September of 1732, though, Governor George Burrington voided two properties of Moore, one of them, the Wilmington land. Afterwards, Moore's family came in droves from South Carolina and several of Burrington's supporters on the Governor's council and in the Assembly died suddenly in 1733 and 1734 (Good ol' boy tactics, lol). Burrington, himself was scared for his life and Newcastle no longer returned his letters. Burrington had served his purpose... his replacement on his way to America. Burrington left before Gabriel Johnston arrived, thinking he wouldn't survive. Newcastle sent James Wimble only to save his neck in the Sussex Election of 1734 and it saved Wilmington from Moore's Family opposition. Wilmington survived by the hair of its chinny chin chin. 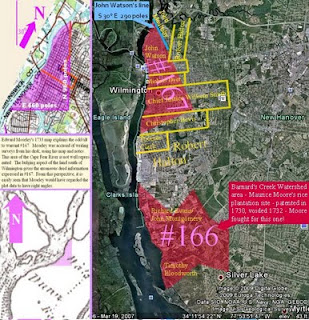