30 September 1724
M. Desforge a Boucher to Louis XV
Only forty of these unfortunate degraded people without a ship remain on the island of Madagascar, who implore their amnesty unable to support themselves and perish there of misery, although they have a number of diamonds, which are of no use to them for to obtain the necessary for life, not having, moreover, a penny in cash. There were still about sixty there at the beginning of this year, but eighteen or twenty got loose in a boat of about twenty-five tons and came here to ask for their amnesty and that of the others who remained after them in Madagascar. While the greater part of their colleagues were here ashore [~23 Sep 1724 at Saint-Paul, Ile de Bourbon], those remaining on board murdered at ten o'clock in the evening their own captain, named John Cleyton, English, with a pistol shot charged with three bullets fired from behind, and at the touching point the wadding set his shirt on fire. And immediately removed the boat, after nevertheless having thrown into their small canoe, five of them all chopped from the wounds they had received, wanting to avenge their captain. Those wounded as they were fled to the ground, and since then we have not heard of what became of them. Those who were ashore and those who fled have since remained very dependent on the colony, where their diamonds are not common commodities although they do have quite considerable quantities. I sent to France on the Company's ship, the Royal-Philippe, almost all these wretches with their iniquitous booty, willingly shedding such vermin on a colony which had objects more useful to the State

[…] Most of it has been slaughtered and poisoned by blacks, or by themselves. These are the most miserable of them who remained on the island, among which is the named La Buse [Olivier LeVasseur de la Buse], who was one of their captains, who after having dispelled or lost the unworthy fruit of his piracy, replied to those who escorted him to take advantage of the impunity offered to him. […] But the rest of the population, through the abuses they committed to procure slaves and women, did not support them with difficulty, taking advantage of the slightest disturbance to eliminate them physically or, more subtly, by poisoning them little by little. small. […] They remain distant from each other without any union. They hold this coast of Ambanivoulle from the 13 ° degree 40 minutes where is the large point which, with reefs, forms a kind of fort called Anglebay, to the river of Manangharre, not far from the bay of Antongil, it is across this coast that the island of Sainte-Marie is situated, which has a good port in a small bay, although a little spoiled by ships sunk with their entire cargo. It is not on this island that the pirates have withdrawn, as it has been believed, but only remain on one of the islets which [lies within] it [Ile aux Forbans or "Pirates Island"]. A mulatto saw there entrenched with palisades where he mounted a few pieces of cannon, as each of these brigands do in particular, who have become inhabitants of these islands, being obliged to be on guard against one another. They undertake to come and stay with them, and to take their defenses, the blacks of the surroundings where they make their establishments. Which are so fond of them that they can hope for some benefit from them, and slaughter and poison them when they can get nothing more from them. However, they keep and highly esteem their mulatto children, who came from the alliance of these pirates with the women of the country. Many are masters of such establishments and have a great deal of authority among the blacks who gladly put them at their head when they go to war. Almost all of these mulattoes, when they found the opportunity, followed in their fathers' footsteps and raced [pirated]. 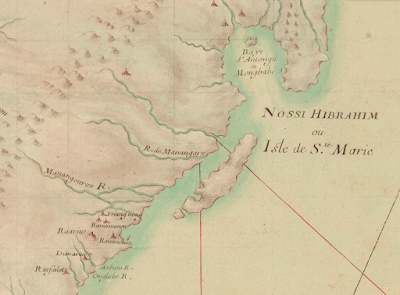