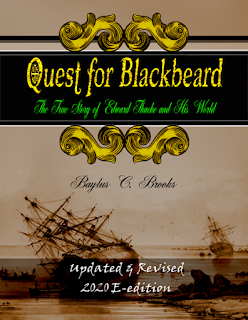 A truly groundbreaking Book!
By Mark Martinez on July 16, 2017
Baylus C. Brooks' Quest for Blackbeard I believe will help to usher in a sea change in the field of piracy in the 18th century West Indies. A highly sourced and entirely readable work, Quest presents a much needed critique of Captain Charles Johnson's 1724 book "A General History of the Robberies and Murders of the most notorious Pyrates" which has served as the principal source used by researchers since the time of its writing in defining the character and exploits of the famous pirate.
Brooks helps to reinforce the emerging theory among researchers that the Captain Johnson who wrote "A General History" was actually the 18th-century Jacobite printer and journalist, Nathaniel Mist. Mist's reputation is best understood by examining his "Weekly Journal" which was the most vocal and extreme resistance newspaper to emerge in opposition to the Hanoverian Whig takeover of the British parliament in 1715. Brooks explains how Mist, under the Johnson pseudonym, wrote "a General History" largely as an exploitation and/or propaganda narrative designed to appeal to the unique political sensibilities of his readers. As such, it has been wrong for researchers to use it blindly, as it has been, to define who Blackbeard was and how he should be understood in history.
In this regard, Brooks has done groundbreaking work in uncovering the true origins of Blackbeard. Unlike the image painted by Mist of a vulgar and brutal monster of low birth, Brooks has discovered through records he has brought to light found in St Catherine's Parish registries of Jamaica and Jamaican deed books as well as through genealogies compiled from wills kept by the Prerogative Court of Canterbury in England that Blackbeard, whose given name was Edward Thache, was actually from a minor aristocratic family who was not far removed from high level players in the political circles of his time - principally among them, the Lechmeres of Hanley Castle in Worcestershire who supported the 1st Whig Junto and who were, through marriage, connected to the Winthrops of Connecticut. Brooks has discovered that Thache began his career, surprisingly, as a well-respected mariner serving in the British Royal Navy aboard the HMS Windsor.
Put simply, Brooks has made a compelling case that Thache was perhaps more privateer than pirate, at least in his early days, with sympathies more aligned with the ousted Stewarts than with the ascendant Hanovers. These alignments appear to have led him onto the wrong side of history. It can be argued that he may have gotten caught in his own emerging reputation fostered by his own press along with the unstable politics of his age, a combination that led him into an outlaw career that he perhaps couldn't escape.
In all respects, Quest is a groundbreaking book. It offers much food for thought no matter what opinions the reader holds on the subject and, at a minimum, presents much newly discovered source material that makes the light of day for the first time in this work. These documents, by themselves, make the book worth purchasing. The well-conceived conclusions Brooks draws makes it invaluable. In all respects Quest for Blackbeard is well worth the read for all who are interested in the subject.
Posted by Baylus C. Brooks at 12:42 PM