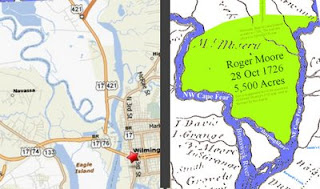 Photo caption: Roger Moore's 1726 land grant of 5,500 acres was not only a tremendous violation of the Lords Proprietor's rules for land grants in the Cape Fear Region. It also represents Moseley's illegal surveying techniques. Compare the survey to a modern map on the left to the "best fit" on the Moseley 1733 map at right. Obviously simplified, the grant certainly fits the 1733 map rather than the actual layout, indicating that Moseley never surveyed this property in detail... probably never stepped out of his office.

Edward Moseley, brother-in-law and friend of Maurice Moore, founder of Brunswick Town, was accused of illegal activities as Surveyor-General of North Carolina. I believe he was guilty as sin! Here are some of the complaints and accusations from various primary sources. Keep in mind that these complaints were each made by people who had a vested interest in North Carolina affairs. Consequently, determining actual responsibility is problematic, at best.

Many accusations were uncovered involving this "blank patent" scheme in North Carolina. Moseley seems to be the focus of nearly all of these accusations. Also, as Surveyor-General, he had every opportunity and cannot realistically deny his involvement. The Duke of Newcastle realized this every time Moseley spoke of his upcoming map. He arrogantly presumed that the power of his family was too great to be denied or opposed. Newcastle politically attacked the "Family" in Brunswick Town and proved Moseley's arrogance a false illusion. We got Wilmington as a result.

How many people know of Brunswick Town today? Where was it? Have you seen Brunswick County, named because of the former town? How does it compare to New Hanover County?

Accusations against Edward Moseley as Surveyor-General:

“[Mr. Lovick] advised Sir Richard to grant no more Patents but by the Artifice and management of Mr Moseley then Surveyor Sir Richard did continue to issue Patents on which the Said Moseley and his Kindred were the most considerable gainers…” (backed up by Lovick)

“Moseley and his Relations have in four or five years time strangely enriched themselves.” (verifiable)

“a few days after I [Burrington] came into this Province I heard Mr Lovick and Mr Moseley offer to sell some lands to Smith then Chief Justice and Mr Halton one of the Council they offered me some also which I then declined , sometime after I was told the Indians took up oar upon those Lands of which they made Bullets with, upon this Intelligence I bought the lands and gave more for them than they are judged to be worth, if I cannot find the oar I have made a very bad bargain.” (unverifiable claim)

“Moseley Speaker of the last Assembly and one James Castellaw a very factious Assembly man, came to me the third day after the Assembly met, and desired me or rather required me, to Promise to give my Assent, to an Act of Assembly to confirm the pretended Laws made here in 1729 after the King's Purchase; this I absolutely refused, there being many things in them Acts contrary to His Majesties Service, and such as I am forbid by my Instructions to pass; I was also Publickly and Privately sollicited to use my Interest and Endeavours that possession of the Lands, sold & granted by Sir Richard Everard and the late Council, should be confirmed to the Purchases, this I denied…” (unverifiable but plausible)

“Edward Moseley, Surveyor General of the late Lords Proprietors, and his Deputys, more especially Mr. John Ashe etc. had been guilty of many vile frauds, and abuses in surveying ; one of their practices was, to survey without warrants for gratifications…” (unverified)

“Moseley when Surveyor did make surveys in his own house, and plotted out land upon paper, with bounds by waters, trees and other signs, and tokens, that he never saw, nor knew anything off, includeing much more then in the returns sett forth, for which patents went out in course.” (verified by study of Roger Moore grant of October 28, 1726 for 5,500 acres)

“Mr. Lovick, and his two confederates Moseley and Wm. Little, ye Receiver General, to sign many pattents wherein ye number of acres are left blank…” (verified no date or acreage on Maurice Moore’s #167 misplaced in Book 8)

“Moseley in confederacy with some of the Council endavoured to stir up divisions in the Assembly and to prevent it from doing business, hoping thereby to put off any enquiries into the frauds he had been guilty of while Surveyor General etc.” (opinion of Burrington, as witnessed by the Board of Trade)

“There have been for several years past very corrupt doings in the Secretary's office concerning the lands, transacted by Lovick and Edwd. Moseley, Surveyor Genl." (Richard Everard’s accusations – hearsay)
Roger Moore's 1726 land grant of 5,500 acres was not only a tremendous violation of the Lords Proprietor's rules for land grants in the Cape Fear Region. It also represents Moseley's illegal surveying techniques. Compare the survey to a modern map on the left to the "best fit" on the Moseley 1733 map at right. Obviously simplified, the grant certainly fits the 1733 map rather than the actual layout, indicating that Moseley never surveyed this property in detail... probably never stepped out of his office.
Posted by Baylus C. Brooks at 6:17 PM