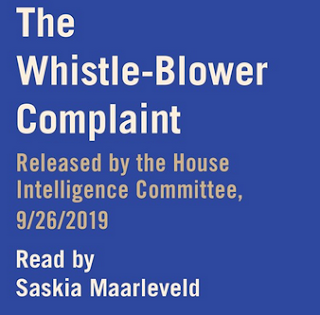 Listen to an audiobook of the #WhistleblowerComplaint..

Yeah.. one has already been made! lol

True History of Our Pirate Nation or Why the GOP are such Assholes!

This actually introduces the conclusion in my book Quest for Blackbeard: The The Story of Edward Thache and His World, but I believe it holds great relevance to our monstrous political problems today and the reasons why our conservatives are such gigantic assholes! So, I'm including it here - so anyone can read it.

True History of Our Pirate Nation!

When Bernard Cooke of Barbados had accused James Grazett of saying “God damn King George and all his family; He is a Dutch dog and son of a whore… Here is King James the third’s health, right and lawful heir to the Crown,” he employed a common Jacobite rhetorical device.[1] Logicians today call it “attacking the man,” or an ad hominem political attack. The United States’ system of checks and balances only works when both political parties negotiate in good faith. Otherwise, any hearings or discussions devolve into ad hominem political attacks, like Cooke's.
King George’s claim to England’s throne is confusing unless you understand that the House of Nassau was an aristocratic dynasty associated with Nassau Castle, located in present-day Nassau, Rhineland-Palatinate, Germany – once a part of Prussia. Nassau, the primary town on New Providence Island of the Bahamas – the stronghold of the Flying Gang of Benjamin Hornigold’s pirates – was named in honor of William of Orange, a prince of Nassau. How did a Dutchman become a prince of a territory in Prussia? Well… William was a Dutchman (although married to Mary Stuart of fine Scottish stock), but also from the Ottonian branch of the Princes of Nassau who gave rise to the Princes of Orange and the monarchs of the Netherlands. The Principality of Orange actually originates from what is now France, but I’m sure you’re already completely confused as most everyone. Suffice it to say that this heritage goes back to the Holy Roman Empire until 1544 when the dynasties of Orange and Nassau aligned. William of Orange married Mary Stuart – but had no issue and therefore, the Principality of Orange fell into the hands of Frederic-Henry, Frederick I of Prussia, who ceded the principality — at least the lands, but not the formal title — to France in 1713. So, the title of a “Prince of Orange” no longer carried property – just a royal connection to the line of Frederick I.
On 1 August 1714, George Louis, son of Sophia of the Palatinate in Heidelberg – herself, the daughter of Frederick V, Elector Palatine and Elizabeth Stuart of England, became King of Great Britain and Ireland and ruler of the Duchy and Electorate of Brunswick-Lüneburg (Hanover) in the Holy Roman Empire. George carried only a minor connection to the Stuart dynasty of England – as well as the Principality of Orange – and, so, was only seen as a “Dutch dog” and an illegitimate heir to the British Crown – especially by Jacobites, or supporters of James III’s claim to that Crown. Jacobite objection to the Hanoverian king owed much to isolationist political ideology – like today’s Republican Party in America. Okay, this is even more confusing and now, you need a mug of grog, right?
Anyhow, this device made political use of prejudice against foreigners: the non-British – particularly against the Protestant Dutch and their kin – Protestant Prussians or Germans. “Dutch dog” made light of George’s legal right to sit on the English throne – especially when he spoke no English, but only German! Cooke accused Grazett of being a traitor for elevating James III or the “Pretender” over King George I, the sitting monarch of the realm and the one that all loyal British citizens were supposed to support. Grazett accused Cooke’s wife of exactly the same thing – with almost exactly the same phrase.
British historian of the seventeenth to eighteenth centuries, Ragnhild Marie Hatton assured us that the problem with King George I was not so much his ignorance of English. It had little to do with his public shyness. It did not even center on his scandalous treatment of his wife, Sophia Dorothea. The German prince was simply a weak, pallid, and foreign Protestant replacement for the strength of a Stuart of Great Britain. As William Makepeace Thackery wrote:

His heart was in Hanover... He was more than fifty years of age when he came amongst us: we took him because we wanted him, because he served our turn; we laughed at his uncouth German ways, and sneered at him. He took our loyalty for what it was worth; laid hands on what money he could; kept us assuredly from Popery ... I, for one, would have been on his side in those days. Cynical and selfish, as he was, he was better than a king out of St. Germains [James, the Stuart Pretender] with the French king's orders in his pocket, and a swarm of Jesuits in his train.[2]

#Blackbeard - 300 years of Fake News - based upon Quest for Blackbeard - https://youtu.be/AnaYDaNoufE

America has been called the "Commonwealth of Pirates" since 1724 for a reason!

#twitterstorians #pirates #Blackbeard
Posted by Baylus C. Brooks at 9:52 AM No comments: