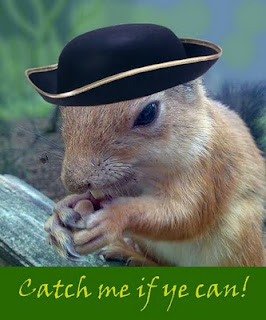 A 1723 Act of the North Carolina General Assembly, Chapter VIII, was entitled "An Act for destroying Squirrels."  Why?  Apparently, because of the furry little American natives, "much Damage and injury is Yearly done as well to the Corn as to the Mast in General in the Several precincts of Pequimins, Pasquotanck and Currituck within this province...."  Does that make sense to you?  Well, it did in 1723 apparently.  This Act was recorded in the North Carolina Colonial Records; available online specifically at http://docsouth.unc.edu/csr/index.html/document/csr25-0015

"That every person or persons who after the Ratification of this Act shall kill and. destroy any Squirrels shall, as Encouragem't therefore, have and receive for each Squirrel the Sum of three pence, to be paid to him or them or to his or their Order by the Vestry men of the parish where he or they are Inhabitants or Resident, in Such Manner and at such times and places as are herein after particularly Set forth; That is to Say, at the Vestry House or place of their Usual meeting, within one Month after Easter Monday now next ensuing..."

That's right... you shoot or capture as many squirrels as you can during the year, "bring in the Same or the scalps of the Same, with the Ears on" to your local church at a date to be set "within one Month after Easter Monday now next ensuing" and get 3 pence each for them.  And to raise the money for the Squirrel Bounty, "the said vestrymen are hereby authorized and impowered to lay a Levy or Tax equally on each Tythable in their Respective Parish to defray and discharge the aforesaid full amount, and no More, and thereupon Cause the Same forthwith to be collected and received by the Church Wardens or Church Warden or such other person or persons as he or they shall appoint for collecting and receiving the other parish Levys and at the Same time..."

Yeah, you got taxed for it.  Do we call it the "Nut tax?"  This was to be a yearly deal.  Happy hunting fellow colonists!
Posted by Baylus C. Brooks at 5:56 PM