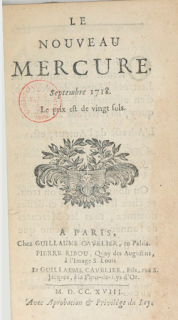 p. 129:
"List of Spanish vessels taken, burn, sink, bottom, & of those who escape;
Vessels caught."
Letters from Bermuda indicate that several of the English Forbans, who returned there to accept the pardon of Roy, went back to start their piracies again. As their number increases in the Isle of Providence, and since they have taken several considerable captures recently, the Court cannot dispense with sending larger forces to America to dislodge them.
p. 134-135:
GALICIA [province in Spain].

In Coruña on September 11.

On the afternoon of the 6th, 4 of the largest warships, which sailed along this coast on the Ostend shipowners, on the Corsairs & the Forbans [pirates], set sail from here for Cadiz, with three [frigates] & 22 cargo ships , on which 38,000 Infantry Men, & 900 horses, both Cavalry and Dragons, were embarked. These troops who confined here during the summer, will disembark in Cadiz, from where they will go by land to Malaga; the Regiment of Catalan Dragons which left here yesterday morning to go to embark in Vigo, having been unable to do so for lack of vessels.
p. 137-138:
In Vigo on September 11

A Madrid Express arrived yesterday evening, with orders from the Court to our Commander, to silence from this Port all the war ships that are ready to set sail. We embarked on these vessels, about 366 prisoners that our 2 [frigates] took from 2 Ostend shipowners.

It has been two days since we started to record the new levies made recently in this Kingdom: They will compose 2 infantry regiments of 16 companies, of 50 men each, & will only form a battalion of 800 men each . The Horses intended to put together the new regiments of Cavalry & Dragons are expected tomorrow.

The two [frigates] who are Coastguards here, recently brought two large Forbans [pirates], of 182 crew each: They took them thirty miles from this port: They have been cruising for three months under the Imperial flag, saying Ostend shipowners. As it was recognized that their patents were false, they were all put in irons, as were the crew of a Corsair from Algiers, whom the same [frigates] had removed eight days previously; & waits until the Commander is a Venetian renegade he will send to Seville, to be judged by the Inquiry.
p. 140:
ANDALUSIA.

In Cadiz, September 10.
One of our Frigates returned to the Port on the 15th, with a shipowner of thirty pieces of cannon, and sixty men the crew of different Nations. Although this building was taken bearing the Imperial pavilion, all the crews have been locked up in the prisons of this City; being suspected of being a forban [pirate].
Posted by Baylus C. Brooks at 3:26 PM