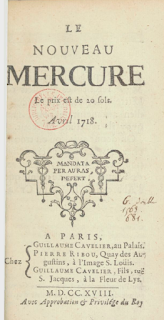 p. 148
MILORDS ET MESSIEURS
... It is written from Carolina that 60 Pirates came to return to the Governor, and 200 others, with one of their Commandants, to the Governor [Bennett] of Bermuda.

It has been said at Jamaica, that Captain Jennings [at least for Jennings, surrendered in Bermuda] Chief of the Pirates, & 4 or 5 others of the most considerable, also submitted in accordance with the Proclamation of the King.

Captain Rogers, who was on his departure for the Isle of Providence, in order to unearth the Forbans [pirates], received a counter-order, leaving that the Court was informed that these Corsairs are so well fortified, & are so great number, that it is not possible to [subdue] them with little force: That thus, one will be obliged to increase those which were designed for this expedition.
p. 159:
PORTUGAL,

In Lisbon, April 6.
... We also suspended the armament of 8 larger warships, & we stopped working on the construction of 5 new warships, & two new [frigates] which had been placed on the sites, for about 12 days . Only two second-tier vessels will be armed, in addition to those that served in the Levant last year; & all our naval forces will make up this campaign only of 16 vessels of line & 4 [frigates], which will be used to convoy our merchant fleets, & to cross on the Corsairs of Salé, & on the English pirates who sail these seas, where they often take.
p. 160:
SPAIN.

Of the 4 warships of the Spanish squadron which flit along the Coté pour la lurete du Commerce, 2 made re-enter this Pig with two of the biggest Corsairs of Salé which they took after three hours of combat, between this place & Vigo. One of the Saltins vessels was mounted with 84 pieces of cannon & 280 men of Crews: They also brought back three vessels; to know, two Portuguese & an Englishman, that these Pirates had taken off the boat in the evening towards the Cape of Finestere; the other two Spanish ships there entered at one o'clock in the afternoon, with two English Forbans taken twelve thousand miles below the Cape of Bilbao, where these Forbans had been cruising for three weeks. All the crews of these sea skimmers, which number more than 700, were to leave this port in a few days, to be transported to Cadiz where they will be used to reinforce the Chiourmes des Galeres. We were working to repair the two Saltins Vessels which are new and very good sailing ships, to join them to the wing, which, after linking, to join it to the wing, which, after this junction, will be separated in two, from 9 warships each; one of which will cross to the costes of Andalusia, & the other, on the Coasts of Galicia & Vizcaya, to enhance trade in Spain & Portugal with other Foreign Nations. In case of rupture with England, these two squadrons will join to compose with those which one builds in the ports of these Costes; which will form a small fleet of 25 warships.
Posted by Baylus C. Brooks at 6:11 PM